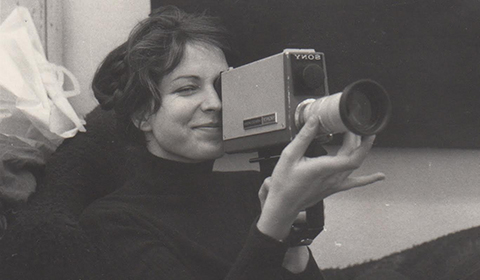 The documentary directed by Callisto McNulty focuses on the feminist movement in Europe during 1970s. Numerous issues on feminist agenda of the time, such as the legalization of abortion, free birth control opportunities, rights of sexual minorities meet with the audience from the viewpoint of Delphine Seyrig, actress and women’s rightist, and, Carole Roussopoulos, documentary film-maker and video artist.

In 1970s, when feminist movement awakens gradually, Seyrig and Roussopolous come together to establish the women’s video collective “Insoumuses” and start to film together the feminist struggle at the time; this is how a series of video serving just like an archive appears. Shaped by the creative and ground-breaking perspective of the duo, these videos have become the starting point of the documentary Delphine et Carole, Insoumuses as a source of inspiration for the director Callisto McNulty, after almost 40 years.

Elizabeth Sankey focuses on the past, present and future of the romantic comedy genre in cinema with her first documentary Romantic Comedy. In this documentary directed over various examples from past to present, the director opens up for discussion the concepts imposed by romantic comedy movies.

Running into someone accidentally, confessions of love under rain, flirtatious arguments, relationships ending up with marriage… Just like many people, Elizabeth Sankey also used to watch romantic comedy movies when she was a teenager, envying the lives and relationships portrayed on those movies. More importantly, she learned from these movies how to love and be loved; or she just thought she learned… In time, she started to question how these movies manage to have so much effect on the audience, and this questioning has become a source of inspiration for her first documentary.

Taking a look thoroughly to this most watched genre worldwide, Romantic Comedy tries to understand how these movies shape our perspective to relationships and romanticism. Why the romantic comedy movies always go forward with the same story and why these stories always have a conservative side? Why the women with a career are reflected negatively? Why no gay stories are told or why the gay characters in the movies are always so stereotype? How, these movies that are highly detached from the real life, manage to develop the audience’s perception in many ways? Presenting sections on many films from It Happened One Night to Bridget Jones’ Diary, the documentary brings a critical approach to the genre with all these questions.

* Reservations required due to limited capacity. Click here to reserve your spot.