* Valentine’s Day special 25% discount is applied on the purchase of 2 tickets.

* Guests who do not have a Vaccination Card (double vaccination is mandatory) or a PCR test result made at least 48 hours before entering the event area will not be admitted to the event area.

* Please do not forget to read the "Event Notes" section before purchasing your ticket for details such as transportation, health measures, event venue, etc.

Kundura Cinema is making its first screening of the year during the Valentine's Day week with Dr. Jivago, one of the unforgettable films in the history of cinema with its impressive love story set in the war period. You can make your brunch and meal reservations at Demirane Restaurant before the movie that will be screened in the special atmosphere of Kundura Cinema on Sunday, February 13th.

Dramatized from the Nobel winning first novel of the author Boris Pasternak, Doctor Zhivago was directed by the famous British director David Lean. Egyptian actor in the leading role, Omar Sharif impresses the audience by his Doctor Zhivago performance, which had a vital role in his international popularity.

The movie with a setting during the civil war period right after the Bolshevik Revolution in Russia, centers around Yuri Zhivago, both a poet and a doctor, falling in love with the revolutionary leader’s wife (Julia Christie), and the challenges he faces afterwards, being stuck between his life and dreams. Beyond this story of Zhivago, audience witnesses the political dynamics of the revolution process and the social chaos in Moscow. Being a period drama with 5 Oscar Awards, Doctor Zhivago draws attention by its memorable scenes, as well as its historical and heroic style.  The music accompanying the memorable scenes, on the other hand, belong to Maurice Jarre, one of the most remarkable composers when it comes to film soundtracks.

You can purchase your ticket on the website of Beykoz Kundura. We do not sell tickets at the door.
For information: +90 216 323 31 30       /          gise@beykozkundura.com
We would like to remind you that you can access your tickets through “My Tickets” on our website when you have logged on as a member.
You can follow our social media accounts for updates and campaigns.

Ticket Refunds: The program might change due to unforeseen reasons. The purchased tickets cannot be exchanged or returned unless the show has been cancelled or postponed.
Program Changes: Don't forget to follow us on social media! If there is a program change due to reasons beyond our control, it will be announced via the website and social media.

Seating Plan: Seats are not numbered.  The measured seating arrangement is kept for pandemic rules.
Discount: %25 discount  applied for the purchase of two tickets.

For your health:
* Due to the regulations that will be in effect on September 6, 2021, if an individual has not been ill or has not been vaccinated (double vaccination card is mandatory) or does not have a negative PCR test valid in 48 hours, they will not be allowed in at the event.
* Ticket control operation is carried out without contact with your QR code digital tickets sent to you via e-mail and SMS.
* Contactless temperature measurement is applied at the entrance of Beykoz Kundura. Those with a fever of 37.2 and above will not be allowed to enter.
* In addition, HES code inquiries will be made through the “Hayat Eve Sığar” application, and guests with risky health conditions will not be admitted.
* Guests without masks are not to be admitted. We ask you to wear your mask properly while you are in the area. A mask will be provided for our guests who do not have a mask.
* From the moment you enter the area, we kindly ask you to comply with the rules applied within the scope of COVID-19, especially "social distance, mask use and hand hygiene", and please pay attention to the warnings of our staff members during your time in the area.
* The screening will take place on an indoor stage, our certified ventilation systems operate with 100% fresh air and do not include particles.

Venue Usage:
* Our audience can enter Beykoz Kundura 2 hours before the session of the ticket they bought.
* We strongly remind you that your event ticket does not allow entry to the shooting sets in Beykoz Kundura and we kindly ask you not to go outside the specified areas.
* The exhibition titled "Kundura's Memory: The World Within a Factory" can be visited free of charge on the days of the event by reservation. To make a reservation, please visit beykozkundura.com/kundura-memory
* Shooting with a professional camera is not allowed without written permission. We kindly ask you to deliver your recording devices to the security point at the entrance of Beykoz Kundura.

Food and Beverage: You can take advantage of our food and beverage services in the event area or you can choose to make reservation to Beykoz Kundura's restaurant Demirane for brunch or lunch via calling +90 536 288 41 99. Guests who have reservations for brunch from 1pm to 5pm are allowed to enter Kundura within these hours. It is forbidden to bring food and drink from the outside.
Session:  All films will be screened in their original language with Turkish subtitles. In the event that there is a technical issue with the electronic subtitling system, our technicians will first work to resolve the issue, and if that is not possible, the screening will continue without subtitles.
We kindly ask our audience to pay attention to come to the sessions on time.
Disabled audiences will be able to enter Kundura Sinema from the main entrance.

Age Limit: Pursuant to Article 7 of Law No. 7163, “Motion pictures without any content rating and classification may only be shown during festivals, special film screenings and similar cultural and art activities by displaying the rating symbol of 18+ years old.”

Recording: Using cameras, video cameras, mobile phones, etc. during the screening to record is strictly forbidden. Recording with any recording device is prohibited.
Audio and video recordings will be made by Beykoz Kundura throughout the event, and the recorded images will be published on Beykoz Kundura's website and social media accounts for promotional purposes only. Beykoz Kundura will use the event records for promotional purposes only and will be able to transfer these records to the artist.

HOW TO GET HERE?
- You can come to the venue with your own vehicle. Parking is free.
- For detailed information on transportation please click
You may use our return shuttle, provided especially for Kundura Sinema guests, from Beykoz Kundura to Taksim and Kadıköy&Üsküdar, departing at the end of the screening 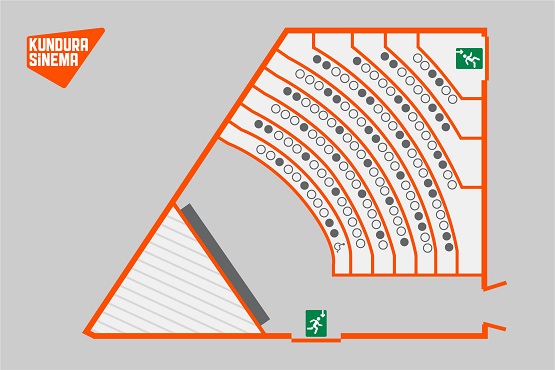