EVEN IF IT DIDN’T HAPPEN, IT’S TRUE

As the world celebrates the fiftieth anniversary of the Apollo 11 Moon Landing, it is important to remember the context within which the space flight occurred and what was at stake at the time. We present three films that toe the line between fact and fiction: using historical figures and/or contexts as the basis for absurdist twists and turns. They may not present the whole truth, but they all reveal something of what lies latent in our collective consciousness.

*Free event, registration is needed. Before coming to see the film you choose, please fill the form.

GENGHIS KHAN CONQUERS THE MOON
USA / 2015 15’ / Colour
English with Turkish sub.
Director | Kerry Yang
In Genghis Khan's last days, an encounter with a Wizard sends him to the Moon. Just as the Mediaeval anti-hero thinks he's made his greatest conquest, he finds himself on a spiritual quest, realizing the absurd clash between one man's need and the silence of the Universe.

DARK SIDE OF THE MOON
France/ 2002 50’ / Colour
English with Turkish sub.
Director | William Karel
A French documentary or, one might say more accurately, a mockumentary, by director William Karel which originally aired on Arte in 2002 with the title Opération Lune. The basic premise for the film is the theory that the television footage from the Apollo 11 Moon landing was faked and actually recorded in a studio by the CIA with help from director Stanley Kubrick.

IMPORTANT INFORMATION
Seating Plan: Seats are not numbered.
The Venue: Guests could enter the venue 2 hours before the session for which they have a ticket.
We would like to remind that the ticket allows enjoying the designated areas only. Visiting the film sets in Beykoz Kundura is not permitted. We kindly ask you to stay in the designated area.
Recording with a professional camera is not allowed unless you have a written permit. We ask you to leave your recording devices to the security point at the entrance of Beykoz Kundura.
Screenings: All the films, except from the children’s film, will be screened in the original language with Turkish subtitles. In case of a technical problem in the electronic subtitle system, first we will try to fix it and if it could not be fixed, the screening will be held without subtitles.
After the sessions begin, it is not allowed to enter the hall. We kindly ask our guests to attend the sessions on time.
Children: Children under the age of 3 are not allowed in the movie theaters to protect their hearing health. We kindly ask you not to bring children under the age of 7 to the movie theater, unless there is a children’s movie.
Recording: Recording by camera, mobile phone or any recording device is not allowed during the sessions.
Food&Drink: You may enjoy the food and drink services at Kundura Cinema or you may prefer Beykoz Kundura’s restaurant, Demirane.
Changes in the Program: Don’t forget to follow us on social media! If there is a change in the scheduled program due to reasons beyond our control, you can get information from our website and social media accounts.

No refunds and change unless the program changes.
The guests with a student ticket are required to provide their student identification card at the entrance.
You can follow our updates and campaigns on our social media accounts. 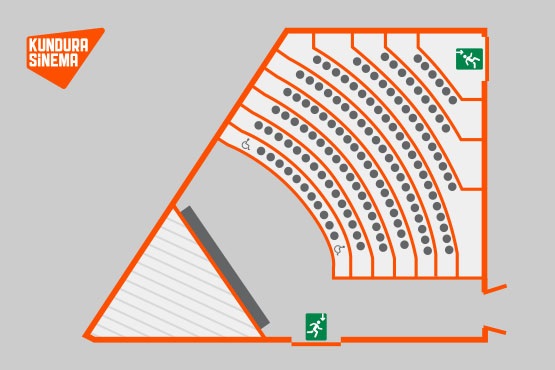